I hurried out of the door today to get in a training hike before the deluge descended. Forecasters had warned that weekend storms, packing turbulent winds and endless rain, would start around noon and wouldn’t stop until about 9 pm.

Being a die-hard hiker, I thought if I started before then I’d miss the rain. No such luck.

The rain started at 10:30 am as I parked at Rancho San Antonio in Mountain View. Ready for a hike under these conditions, I grabbed my poles, zipped up my rain coat and headed up the tough 4-mile PG&E Trail, a fire road popular with locals who want to get a good burn.

It doesn’t disappoint. As I turned one corner after another revealing yet another climb, I broke into a sweat. Under gray skies, it rained steadily and the wind began to pick up as I dodged mud puddle after slippery mud puddle. Yes, foolish not to consider the forecast could be a little off, but the rain wasn’t too bad.

I’d later recall those naive thoughts as I would be soaked through and pummeled by blustery gusts knocking me off balance. But there were some rewards for my intrepid – or foolhardy? – hike that I wanted to share.

As I reached the top end of the PG&E Trail, this rainbow – flirting with double – welcomed me and some other hikers. It was such a treat after a crawl uphill under stormy skies.

The PG&E Trail Vista Point on March 5, 2016, at noon in Rancho San Antonio. Greeted by a rainbow – almost a double! Credit: Miranda Leitsinger

And then, as I made my way up the 1.1-mile Quarry Trail – here was where the wind really took hold though the climb wasn’t so bad – rain-dappled spring wildflowers offered some encouragement amid the storm.

As I returned downhill to complete a 10-mile in and out, some of the other park denizens stopped me in my tracks, too, with their new rain bath sheen.

This Pacific Madrone and its lichen friends glow in the rainfall in Rancho San Antonio on March 5, 2016. Credit: Miranda Leitsinger

Falling rain, sounding like a running stream, glistens as it hits a puddle in Rancho San Antonio on March 5, 2016. Credit: Miranda Leitsinger

Despite being wet through and through, these moments of grace in the storm brought such a smile to my face as I trudged through several messy and muddy paths. Every step was worth it. As another hiker said to me while passing each other, “It’s fun, isn’t it?” Yes, indeed. 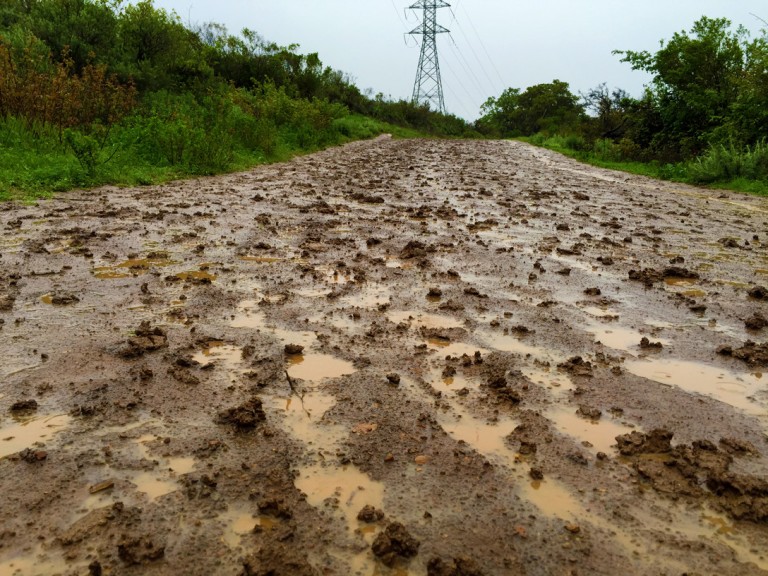 A reporter since 2000, covering the aftermaths of both tsunamis in Asia, the fight for LGBT rights in the U.S. (including the Boy Scouts of America's struggle over the question of gay marriage) and several natural disasters plus shooting and bombing tragedies, I'm starting Campfire as a forum to share stories as I contemplate my next life chapter. Topics I'll feature will include conservation, the environment and our collective love for the great outdoors - from penning my own hiking reviews to sharing stories (photos, blogs and videos) from others. The idea is to celebrate life, all of the "ups and downs." I hope you'll join the conversation. View all posts by Miranda Leitsinger